A Charging Station is not a Battery charger which is a component found onboard the vehicle. Rather a Charging Station is a place that can supply electric power to an electric vehicle. This can be as simple as a standard 15Amp 110vac outlet or higher power 220vac outlets, a J1772 stations, or even DC Fast Charge CHAdeMO charging stations. 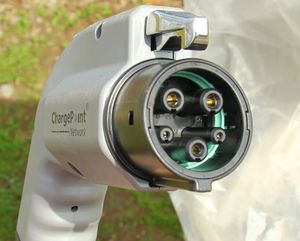 SAE W:SAE_J1772 is a North American standard for electrical connectors for electric vehicles maintained by the Society of Automotive Engineers and has the formal title "SAE Surface Vehicle Recommended Practice J1772, SAE Electric Vehicle Conductive Charge Coupler”. It covers the general physical, electrical, communication protocol, and performance requirements for the electric vehicle conductive charge system and coupler. The intent is to define a common electric vehicle conductive charging system architecture including operational requirements and the functional and dimensional requirements for the vehicle inlet and mating connector.

There are many commercially available J1772 options as well as methods to build your own, such as the OpenEVSE Project - Open Source Design for EVSE. See User:Rjf/Open-EVSE for Ryans home built Open-EVSE units. 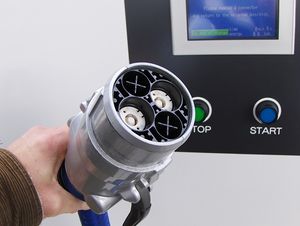 W:CHAdeMO (sometimes spelled CHΛdeMO) is the trade name of a quick charging method for battery electric vehicles delivering up to 62.5 kW of high-voltage direct current via a special electrical connector. It is proposed as a global industry standard by an association of the same name.

CHAdeMO is an abbreviation of "CHArge de MOve", equivalent to "charge for moving". The name is a pun for O cha demo ikaga desuka in Japanese, translating to English as "How about some tea?", referring to the time it would take to charge a car. CHΛdeMO can charge a car in less than half an hour.