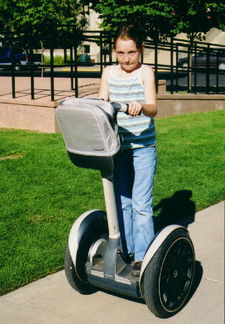 The Segway is an electric powered, upright scooter (see photo at right) used for transportation and recreation. Having only two wheels, the device has a footprint not much larger than a single person and travels at a top speed of 10-12 miles per hour.

The device is kept in balance, even without a rider, by computers and motors in the base, with gyroscopes being used to detect deviations from exact balance. In order to move, the user leans forward or backwards. A hand control enables turning.

The Segway was first introduced in late 2001 with regular sales starting in the Spring of 2003. Even prior to its official introduction, it was the subject of highly enthusiastic (and speculative) reports, but the price tag of ca. $5000 has contributed to the product's lack of commercial success, at least up to this point in time.