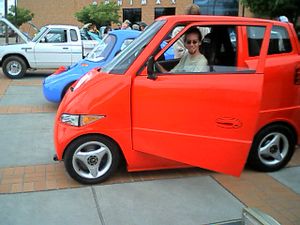 I'm a big fan of Li-ion and polymer batteries, both Li-ion and Li-polymer, which are related and have the similar chemistry characteristics, like NiMH and NiCD. PbA are the heaviest and least energy dense but can easily deliver power and are cheap to produce, they are also one of the most recycled of products. Ni has better energy and weight characteristics though Li is as much again better representing the greatest of battery chemical potentials. Li has only lately been able of delivering great power and long life, since current mass production cost is more economical than you might think it could now deliver the potential promise of the electric vehicle better than can sometimes be imagined.

EV and PHEV info, images, and video clips set to Nine Inch Nails track The Warning and including a number of Who Killed The Electric Car video clips.

This is my first "music video mashup" created with Sony Vegas 7. After the minor post production work on my video "Resurrected EV1 comes to SEVA Meeting" (http://www.youtube.com/watch?v=Ewg8yawjn-M, GM EV1 WWU Resurrection) and listening to NIN on my commutes home I thought it was time to set some images to music in an attempt to portray a message about the past, current, and future state of electric vehicles and plug-in hybrids. The odd flag images and USBM warnings used in the video are from the album and AIR-Art is Resistance. I hear that GM wasn't very thrilled with the last video of a running EV1 I and others posted, so I'm sure they will be thrilled with this one. Just remember it's meant to motivate you and them towards the goal of getting such vehicles onto dealer showroom floors. Once that happens I'll start to make happier videos that poor less salt into the EV1 wound.

I need to work on these pages : News, Research, Other Resources, User:Rjf/Links Ð 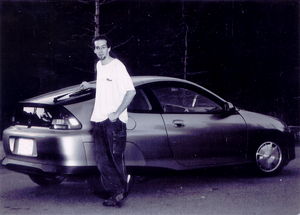 Ryan and his Honda Insight.

The Honda Insight is an outstanding machine, one of few close relatives of the NSX having grown up in the same factory. All Aluminum with 10kW of torque-ie electric and an ICE so optimized it even had it's own 0w20 oil. It still sports the best aerodynamics, fuel economy, and is an all arround fun drivers kind of car.

I've moved this section of the page to EAA-PHEV:PriusBlue as it has grown somewhat.

See User:Rjf/Electric Kawasaki for the details.

A 24v electric scooter, with detachable seat and storage. It has a Lithium-Ion pack which delivers 10 miles of range.

I build a Li-ion battery pack for a submarine replacing three disposable (AA) cells with a pair of small rectaingular cells. One pack was wired in parallel with stock voltage and had rather lacking performance, as it did out of the box with duracells. A second pack was wired in series and with twice the voltage running the propulsion motors which then ran twice as fast, the fun facter was substantially improved.

Broke the trainer and haven't got a real plane yet, the "Air Surfer" is a fun and durable nurf type glider which delivers good entertainment and fly time with a proper smart hobby type battery charger.

These high rate anonymous contributions sorta make me nervious, I would rather these folks had an account. I wonder where some of this content is coming from, some appears to be small and by hand while others seem to be copy edits.